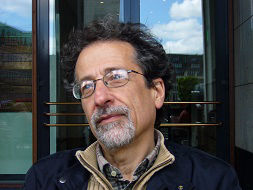 Cesare De Marchi was born in 1949 in Genoa where he spent his early childhood. He graduated in philosophy from Milan, the city where three of his seven novels are set. In 1995 he left for Germany, where he still resides. From 2003 till 2012 he was president of the Stuttgart Società Dante Alighieri.
His first narrative attempts appeared in L'ora di memoria (1981). Other tales by him were published in «Nuova Prosa», a literary review that he had founded in 1987, and in other periodicals. His childhood autobiography Il bacio della maestra, 1992, reached a wider public and was followed by the pseudo-detective story La malattia del commissario, 1994, Il talento, 1997, for which he was awarded the literary prizes Campiello and Comisso in 1998, then Una crociera, 2000, the three stories of Fuga a Sorrento, 2003, the novel La furia del mondo (2006), for which he was awarded the literary prizes Frignano and Dessì, La vocazione (2010), L'uomo con il sole in tasca (2012), and finally Nove storie storiche.
Apart from being a narrative author, De Marchi has also gained special acclaim in German studies and translations, ranging from his first essays on the young Hegel and on Schiller's philosophy, to translations of and comments on Fontane (Amori, errori, 1982), Cardinal de Retz (La congiura del conte Fieschi, 1990), Grillparzer (Guai a dire bugie!, 1991), again Schiller (Kallias o della bellezza, 1993), then Schnitzler (Novelle, 2006), Thomas Mann (Tonio Kröger and Tristan, awaiting publication), contributions on German literature written for l'Enciclopedia della letteratura De Agostini (1997), Balzac (Il padre Goriot, 2004), and finally the chef d'oeuvre of German humanism, the Epistolae obscurorum virorum, whose humoristic dog Latin he rendered into an interesting pastiche mixing the archaic with the demotic. (Lettere d'uomini oscuri, 2004; new impression 2014.) Among other critical works is his edition of Luigi Da Porto's La Giulietta (1994) and the essays Romanzi. Leggerli, scriverli (Feltrinelli, 2007) and L'arte di raccontare (Edizioni di Storia e Letteratura, 2013). At the moment De Marchi has a Pamphlet Democrazia politica, democrazia letteraria in preparation.